How does a Premium Functionality Employer create an employer based competency? Print

Go to https://app.riw.net.au and login using your credentials.

Click on Employer Competencies under the Premium Features on the main dashboard.

On the Employer Competencies screen, click on the Add button.

Populate the fields to create a new employer competency, noting that a red asterisk (*) denotes a mandatory field. Read on for some further guidance about filling in the details before clicking save to complete. 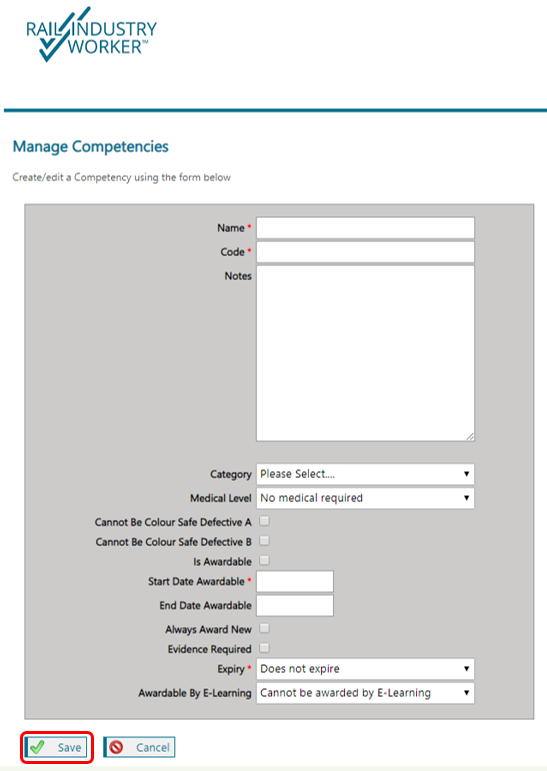 The employer competency name should include the company name as an identifier. For example, RIWCompany01 wants to create an induction competency and may choose to set the name as RIWCompany01 – Induction.

As well as giving the competency a name, a unique code must also be assigned to each individual competency created to support the simple management of employer’s competencies. This can consist of letters and/or numbers, e.g. RIW01-Comp1.

Notes may also be added in the text box if required.

Next, select the Category that the competency will be associated with from the drop down list.

If the competency requires a cardholder to hold a specific medical level before it can be validated, select the appropriate medical level from the drop down list.

Note: competencies can only have their expiry dates extended by re-certification if they are still current at the point the new competency is awarded. If the competency has already expired, it will be awarded as a new instance.

Should evidence be required to validate the competency, tick the Evidence Required checkbox?

The Expiry field defines the rules under which the competency expires. It can be set to:

If the competency is set to Expire after set period, new fields will be displayed:

Should an assessment be required to validate the competency, tick the Assessment Required checkbox.

Finally, choose who can assign the competency to the cardholder noting one of the following options:

Save the new competency record when the definition is complete. It will now be available to award, but only to cardholders employed by or associated with the company.

Competencies can only be deleted up to the point that they have been awarded to a cardholder.

Did you find it helpful? Yes No

Send feedback
Sorry we couldn't be helpful. Help us improve this article with your feedback.

Sign up to stay up to date with the latest RIW news and changes: